Piedmont! A region bordering France and Switzerland, notorious for its refined cuisine, its white truffles from Alba and its complex terroirs… Time is suspended when you look into the distance. Locals speak slowly, bottles are mysteries. Also known as the Italian Burgundy, this region provides great tasting emotions, an incredible terroir, and singular grape varieties. This region of northern Italy produces some of the country’s most prestigious wines. Local grape varieties rule here, notably the unavoidable Nebbiolo which is found in the Barolo appellation. It is also in this region that we find the largest number of Appellation Areas. Pride of place! I have fond memories of my trips to the heart of this region to discover the secrets of its great Italian wines. 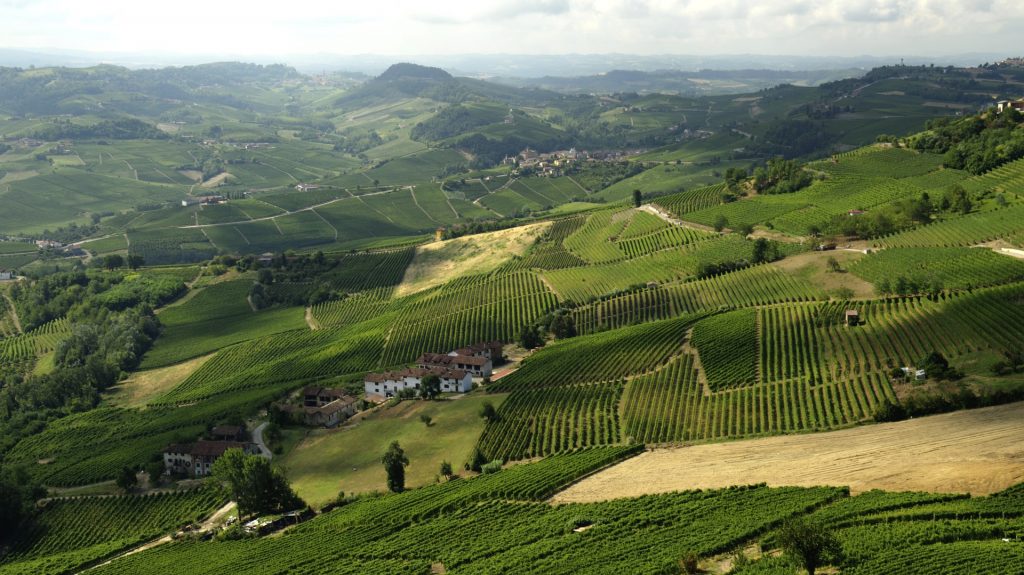 Tuscany is further south, not far from there. A Mediterranean climate, strong-personality wines – just like its inhabitants – combining power and elegance. What a pleasure to go for a walk in the Mercato Centrale in Florence and to enjoy a Panino with a glass of Chianti Classico or Ruffina. Sangiovese is the king grape variety and Chianti is one of the most widely distributed wines in the world. But be careful, you need to be selective. Tuscany is also home to the Super Tuscan wines! They are no superheroes (although one may think they are). In fact, in the 70s, these wines produced from Bordeaux grapes made the reputation of this region. This is the case of Sassicaia, for instance, made from Cabernet-Sauvignon.

By the way, did you know that the Italian Sangiovese is the Nielluccio in Corsica? 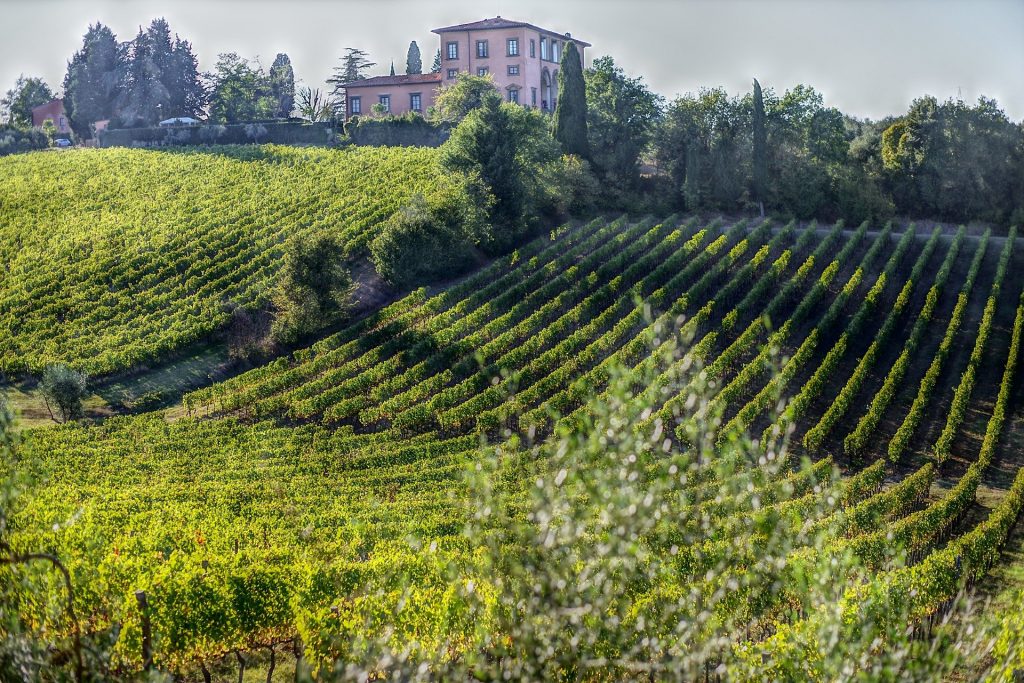 Let’s get down to business with this great Barolo from Mascarello. This Estate, which is now unavoidable, was founded in 1881. Today, it can be considered one of the best estates in the world, as the quality of its wines is no longer in question. The chalky plot of Monprivato is exceptional.

Its nose is complex, with straw, cut hay, black fruit and minerality. The palate is deep and structured, crisp and lively, with an opulent and energetic body. This great Italian wine has many more years to go. A Barolo of great purity, tinged with a rare elegance.

This Estate represents the purest tradition of producing great Barolo. In the 1920s, Giacomo Conterno was a pioneer, one of the very first to bottle his wines. Long maturation in old barrels. His son, Roberto, carries on the family tradition. Wines that can be kept for twenty to thirty years without a wrinkle. Incredible but true, and this comment comes out of the mouth of a Sicilian woman!

A remarkably balanced wine. Sappy, with rich, fleshy tannins. Volume in the mouth, chewy. A set of aromas that make this a remarkable wine with a beautiful persistence. It would be a sin not to drink it!

Another emblematic winemaker of Piedmont, Mario Vietti (now deceased), a talented producer of Barolo and Barbaresco, that other must-have appellation. He created the Estate in 1919, renown for producing wines that brilliantly represent its terroir. In the 1960s, faced with the standardisation of wines, the Vietti Estate was able to impose a singular character. Small yields, long macerations.

On a clay-limestone terroir, this splendid Nebbiolo cuvée was aged in stainless steel vats and then 30 months in barrels and barrels. An intense nose of ripe and juicy cherry, with pretty floral notes and sweet spices. The palate is mineral, powerful and frank. A grain of tannin that calls for a delicious dish with sauce. A complex bombshell, quite simply.

The Giacosa Estate has existed since 1900, and Bruno Giacosa has pushed it to excellence. A brilliant cellar master and great wine dealer, he has produced some of the region’s greatest wines. Since his death in 2018, his daughter Bruna runs the Estate. Long maturation in barrels, a characteristic of traditional winemaking. In addition to producing great Barolo and Barbaresco wines, this Estate also offers a great appellation wine: Barbera d’Alba (where this sublime white truffle is to be found!).

The nose opens with notes of liquorice, instantaneous and intense. Then comes red fruit. On the palate, precise is the balance and fresh is the juice. A grape variety (Barbera) that deserves to be discovered and appreciated!

“All the know-how of the estate can be found in this intense, balanced and incredibly complex Barbera d’Alba. It is remarkable!”

This is one of the great Tuscan appellations, made from Sangiovese. During the 19th century, the Biondi Santi Estate made it possible to gain international recognition for the quality of the wines of this terroir. It is an emblematic example of the very best of Tuscany. (The Estate now belongs to the EPI French group). A unique wine character, far from fashion trends.

On the nose, it is madness: notes of roses, pepper, blackcurrant, plum and balsamic. The mouth is racy (unique and expressive). An explosion of red and black fruit, spices and violets. A superb freshness worthy of the great long-keeping wines. My advice: open it a few hours before and enjoy it with a dish with a sauce full of flavours, and you will get close to paradise!

It’s impossible to talk about this appellation without mentioning this Estate, which has existed since the 17th century (that is how far back it goes!). It is a marvellous estate in the middle of rolling hills, beautiful as a postcard. Grapes is rigorously selected, and wines are deep.

This wine is only produced in the best years, from the magnificent vines of Pianrosso at an altitude of over 200m (only 1.69 ha with this appellation).

The nose is powerful and spicy, with a sense of warmth and depth. The palate is remarkably opulent, round, fleshy and intense. The red fruit mingle with the spices, the tannins are there but with a beautiful patina. A very classy wine with a high ageing potential.

Certainly one of the vintages that has marked my memory as a wine taster. Paolo de Marchi has been doing a remarkable job in Chianti Classico for years and works with Sangiovese like no other. His wines are powerful yet smooth, tannic yet full of finesse. He also produces great white wines made from Chardonnay. His son, Luca Sperino, whom I was lucky enough to visit, produces magnificent wines in Piedmont. Like father, like son!

We find typical notes of black cherry, violet and rose. The palate is incredibly drinkable, tense and structured, one can feel all the restrained power that will develop with the years. 18 months in oak barrels have brought an extra grain of tannin to this surprisingly deep wine. A bombshell, if I may say so.

As I said above, in the 1970s, the arrival of the Super Tuscan wines was a big deal – and here is one of the best of them. This superb Estate of the Frescobaldi family has existed since 1981 in the Bolgheri region. Personalities such as Robert Mondavi and Michel Rolland have added their stone to the building. Like the great Bordeaux wines, this Estate has succeeded in establishing its wines throughout the world.

2016 is particularly successful, a powerful and intense nose of black fruit, smoky and woody notes, an equally powerful mouth with polished tannins. A complexity evolving with each sip. The mosaic of volcanic and alluvial soils with marine influences is sublimated as never before.

Secondo Petiti, from Piedmont, once wrote: “If the great men of this world were to meet around a table, nothing would be better to put an end to the war than a good “Bagna Cauda” and pints of a good Barbera to relax the nerves heated up by the battlefield! This is the only way to restore peace, love and reckoning.”

So, are you enthralled?

The author of the article

Apart from training sommeliers, Alessandra Fottorino works as an agent, consultant and author. She is a member of the Independent Winegrowers Jury in the latest Régal magazine and is passionate about biodynamic, natural and orange wines. Her first graphic novel published by Hachette will be available in 2022.

The Jura region: a new Eldorado for winegrowers and speculators?